The best demo education It is a long established fact that a reader.

Teaching students about Fake news…Why is it important?

The world of news and journalism is changing rapidly. As more people get their information from social media, the line between fact and fiction becomes more blurred than ever before. It’s more important than ever to teach students how to tell real news from fake news. Fake news can be defined as stories that are made up of people who want you to believe them and spread them on social media sites like Facebook and Twitter.

It’s easy to see why fake news is such a problem. Often, it’s designed to make us feel angry or scared—and it works! We tend to believe things that confirm our ideas about what we think is going on in the world, even if those ideas are wrong. When we read something that confirms our beliefs, we’re more likely to share it with others, which gives the story more power because of how many people are exposed to it.

Fake news isn’t just about politics though—it can also be about entertainment or science. For example, there was once a story going around on Facebook which said that NASA had found signs of alien life in space dust samples from Mars: it turned out this story was completely made up! The problem with fake news is that once people start believing something false (like an entire planet being overrun by aliens), they’ll often stop looking for other sources of information that might help uncover the truth

Students need to be taught that they can’t always trust what they see on social media and that they should never share anything unless they know it’s true. They should also be taught that when something sounds too good to be true, it probably is—and that even if it seems like a story is coming from an authentic source, there might be ulterior motives involved in its creation.

In today’s world, it’s easy to get caught up in the rush of social media. The constant stream of information can be hard to sift through—but it’s even harder when you are a student. As a teacher, you have the responsibility of teaching your students how to evaluate their sources and make informed decisions about what they read online. You should also help them learn how to recognize fake news, which is sadly something that many people are now familiar with.

Teaching students about fake news is a complicated task. It requires teachers to not only teach students how to tell the difference between fact and fiction but also help students learn how to think critically about the information they’re presented with.

A good way to start is by talking to your students about what “fake news” means and why it’s important to know how to tell the difference between true and false stories. You can also offer examples of some common types of fake news, as well as real-life examples of how people have been fooled by such stories.

Next, you’ll want to teach your students how to identify fake news in their daily lives. This can be done through a variety of activities:

– Have them read through current events articles online and see if they can spot any fake stories (there are plenty out there).

Here are some tips for teaching your students about fake news:

2) Give examples of different kinds of fake news and explain why they’re harmful.

3) Teach them how to identify fake news and why this is important—for example, some fake stories are created by people who don’t have good intentions or who may even have malicious motives behind their reporting; other times, fake stories are just made up entirely by someone who wanted attention but didn’t realize how damaging.

4) Show them examples of fake news stories. You can find lots of examples online—just search for “fake news” or “hoaxes.” Have your students read some examples together and talk about why they think these stories were made up or why they think they might be true (even though they’re not).

5) Have students write their own fake news stories based on what they know about current events or history. Have each student tell their own story, then have everyone share what they wrote with each other so everyone can see what kinds of stories other people came up with. You can also ask each student who wrote the best story or which one was the funniest if you want!

6) In a generic model with younger students, one way to do this is by playing games like “I Spy” with your children. These games help them learn how to observe their surroundings and make connections between different objects or concepts. You can also play “Guess Who”, which teaches them how to read facial expressions and body language so they’ll be better able to identify when someone is lying or telling the truth.

7) Another way to teach children about fake news is by reading books together that deal with this issue specifically. Some good examples include “The Boy Who Cried Wolf” by Aesop (a fable about a boy who repeatedly lies until no one believes him), as well as “The Boy Who Cried Wolf” by James Stevenson (the original story but with more modern illustrations). Both have been adapted into movies as well; these will help your child understand what happens when people believe lies over truth!

8) Next, teach your students how they can spot fake news themselves by looking at the URL and author byline. Fake news sites often have URLs that don’t look like normal web addresses and often have names that sound like legitimate news sites (such as “ABC News”). Also, check the author’s name: if their name sounds like someone famous or well-known, but there are no references or links back up what they’re saying, then it could be fake.

9) When evaluating online information, students should look for signs that indicate whether or not the story is credible: is it from a reputable source? Does the story contain information that is too good to be true? Has this story been reported by multiple credible sources? Is there an appropriate amount of detail in the article?

10) students should be taught how to avoid encountering fake news. They can do this by using tools like AdBlocker and NoScript on their browsers and blocking ads on social media sites like Facebook and Twitter. They can also avoid reading articles by following reputable journalists on Twitter or subscribing to email newsletters from reputable sites like NPR. Finally, they can avoid ad-supported sites like Facebook altogether by using an ad blocker or paying for premium accounts on those sites (which may cost money). 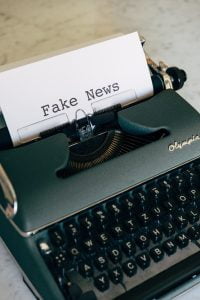 The most important thing for students to know when encountering fake news online is that they have the power to report it. It’s a fact: false and misleading stories are everywhere on social media. But you don’t have to accept them as facts—you can report them!

The first step is identifying the problem—if you see something that looks like fake news, ask yourself: “Is this something I feel like I can trust?” If not, report the story.

If you’re not sure what to do, look at the bottom of your screen. Most sites have a link that says “report” or “flag,” which will take you to a page where you can choose whether or not this content violates their rules or terms of service. You’ll also be given an opportunity to explain why this content should be taken down by moderators and administrators.

When you report content, it goes into an internal database so they can review it and decide what should happen next (or if anything should happen at all). It might take some time before action is taken, but it’s worth reporting—and it makes a difference!

What is Design Thinking and why is it so popular?

How to Create Course?
How to Become an Instructor?
How to Buy Course?